Normally at this time of year I am getting a little bit over-excited. A bit too enthusiastic about the sparkly lights and the expectation of how fabulous Christmas will be.  And every Christmas I feel colossal disappointment that it fails to deliver.  This year, however, has been different.

Back in October I learned of an ATC swap via VeryBerryHandmade.  An ATC is an Artists Trading Card and the idea is to make a card and send it to your allocated recipient at the appropriate time.  The theme for my very first ATC swap was ‘Winter Sparkle’.  It has to measure 2.5″ x 3.5″, so is quite tiny.  I don’t quite know what prompted me to take part.  I certainly don’t consider myself an artist, but there was something about the idea that I thought ‘I can actually do this’.  It’s taken me well out of my comfort zone, but I really enjoyed doing it.  Obviously, I had to include crochet in mine, and as you can see from the picture it was achieved using the worlds tiniest crochet hook!

Already I have learned so much about how to improve for the next one.  The ATC I received was just stunning and made me so glad to have taken part. 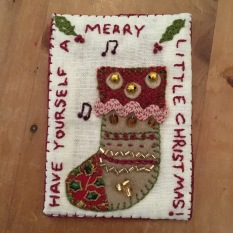 As well as the ATC I have also been taking part in a Countdown to Christmas organised via Julie Creffield and the TooFatToRun Clubhouse.  During October Julie sent the Clubhouse members an email asking us what we were going to do with the remaining 80 days of the year.  Were we going to waste them and coast towards Christmas, or were we going to do something with them?   Maybe set some goals so that we finished the year on a positive note rather than wonder where the year had gone.  It made me realise how much Christmas has become a focus for the end of the year.  For so many it’s a target and everything else seems to lose it’s importance as we race towards 25th December, that it’s become the be all and end all of the year for many people.  How much time is wasted planning and preparing for one day of the year that could have been spent more wisely.  So, I set about making use of the final days of 2016 more effectively.  It made me realise how since I have finished work the days are just passing me by and I’m not making the most of the amazing opportunity that I have.

What I haven’t been doing is stressing about whether or not I’ve got the right gift for the right person, or the theme for our Christmas table, or whether or not our presents will fit under the Christmas tree and look just so.  So many people, and until this year I would include myself in this, feel pressure to make Christmas just so and I have been constantly disappointed that it failed to live up to an unrealistic idea.  This year, I have put it into perspective and as a consequence I feel I have a much more realistic idea of what Christmas will be like this year.  Our tree will also be wonky and probably a bit slapdash, our table-ware mis-matching and there will be a distinct lack of presents under the tree.  But for the first time in a long time I will not be disappointed, because I know I will have the best of everything.  I’ll still need a bit of sparkle, obviously!

One thought on “Christmas Countdown”

Exploring best practice and research in sexual violence. A loud voice in the fight against victim blaming. Written and Managed by Psychologist and Best Selling Author Dr Jessica Taylor

The ultimate place for smashing flavors

I GOT MINES
Start a Natural Healthy Lifestyle