Over the past few weeks I’ve been quietly crafting away.  Husband and I are in the process of trying to move.  It has been something of a tortuous process which started last October.  Suffice to say, we have been living with half built wardrobes and a fair percentage of my crafting paraphernalia has already been packed.  What then to make?

The International Diploma in Crochet has been a godsend, as many of the compulsory submissions are generally quite small.  I have had feedback on my initial submissions and I passed them all – I just need to work on my diagrams a little more.  So in preparation for my return to Bristol I have completed a circle, a diamond, a piece of half treble with the look of knitting and started grading a pattern for a child.  I have turned into a bit of a hoarder of completed pieces – but besides the hassle of a world turned upside down, I also don’t want to send things for marking if I am about to move!

Otherwise, I have turned my hand to sewing and have taken the opportunity to use up some scraps and make a few things for our home.  I’m mid way completing some nautical bunting for one of our rooms in Portugal.  There is already a crochet garland up at the window, which was one of my first pieces, using an Emma Lamb pattern.  But the nautical theme of the bunting really suits our sea front home.

In another room I’ve made some tie backs.  The fabric was actually free with a magazine, but it fits perfectly with the colour scheme in the room and gave me a chance to try something I wouldn’t 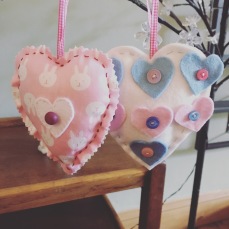 ordinarily do.  A great find for expanding my repertoire has been the Craft Club Box.  The first one was based around Easter – but unfortunately I arrived home to open the box after Easter had passed.  I used the contents to make a couple of hanging hearts – a little bit twee, and not generally my thing, but I had a great afternoon creating them.  The second box I received was a kit for making a mug rug.  Who knew how popular mug rugs are?  I found multiple ideas on Pinterest and again had a great time creating them.  I would definitely try making others, as they would be great stocking fillers.

But back to crochet.  With no specific projects in mind I have been experimenting.  I’m currently making squares using thread.  I’ve been really interested in the use of mixed media and love ‘inchies’

created with fabric and embroidery.  I saw this picture on Pinterest and wanted to have a go myself.  I’m not at all sure what I will do with them, I may well create a wall hanging, but I’m really enjoying the process of making the squares and will worry about the final piece at a later date!  I’ve also been following a series of lessons with the Irish Crochet Lab.  Larisa is leading members through creating motifs from a traditional Irish Crochet book.  It’s been thoroughly enjoyable and again, I would probably have missed out on the opportunity had I a bit project on the go.  My attempts are a little bit messy – but with practice I am getting there.

There is, however, one bonus of living out of boxes.  It has definitely curbed my fabric and wool buying habit.  Goodness knows where the stash I currently have is going to fit when we do eventually move, so adding more to it is a definite no-no!  But I’ve realised that there is always time and space for small projects and may well have discovered a few new favourites on the way.

Exploring best practice and research in sexual violence. A loud voice in the fight against victim blaming. Written and Managed by Psychologist and Best Selling Author Dr Jessica Taylor

The ultimate place for smashing flavors

I GOT MINES
Start a Natural Healthy Lifestyle